People with Attention Deficit Disorder (ADD, AD/HD, ADHD) often take stimulants such as Ritalin (Methylphenidate) or Adderall to help with attention. Though these stimulants work for many people, others find them ineffective. Even for those who find prescription stimulants helpful, the benefits are accompanied by side-effects, some of which make taking the meds undesirable.

Many of our clients either want to avoid meds or to stop taking them. In one case, William, a 43 year-old school administrator with ADD, was taking Ritalin. He wanted to find an alternative that not only worked better for him, but also didn't have the side-effects he was experiencing while on the medication. Additionally, he was concerned about addiction, due to his long-term use of the drug. William's side-effects included difficulty sleeping, anxiety, dizziness, and occasional nausea.

William was diagnosed with ADD as an adult. Though the effects of his prescribed Ritalin were noticeable, they were less than ideal. He quickly went from 10mg to 20mg per day, but still wasn't performing as well as he'd like. In searching out an alternative solution to the medication, he chose to use a custom-made recording of Rhythmic Entrainment Intervention (REI) music.

When he began REI, he immediately noticed his ability to focus improved while the recording played. Even on days he deliberately skipped taking his Ritalin dose, his focus improved with REI. Skeptical of the effects of REI compared to his various doses of Ritalin, his psychiatrist suggested that he be evaluated by the T.O.V.A. (Test of Variables of Attention) to determine what effects REI may have on his performance.

The T.O.V.A. is a standardized computerized test of attention used for screening, diagnosing, and monitoring treatment for ADD. This test is an objective measure of response time for both visual and auditory stimuli. This test has been normed for people ages 4 to 80+. You can learn more about the T.O.V.A. here: http://www.tovatest.com/

10mg Ritalin: -6.60. This score is well below the normal range. It would be considered inadequate and reason for a higher dose of the stimulant medication. 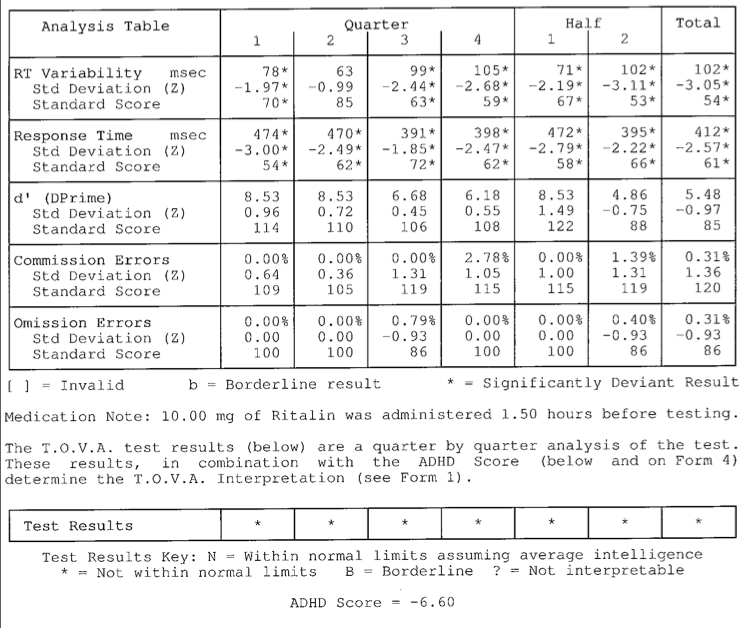 20mg of Ritalin: -3.47. This score was closer to the normal range, though still inadequate. It suggests that the dosage should be raised, but balanced against the negative side-effects he was experiencing. 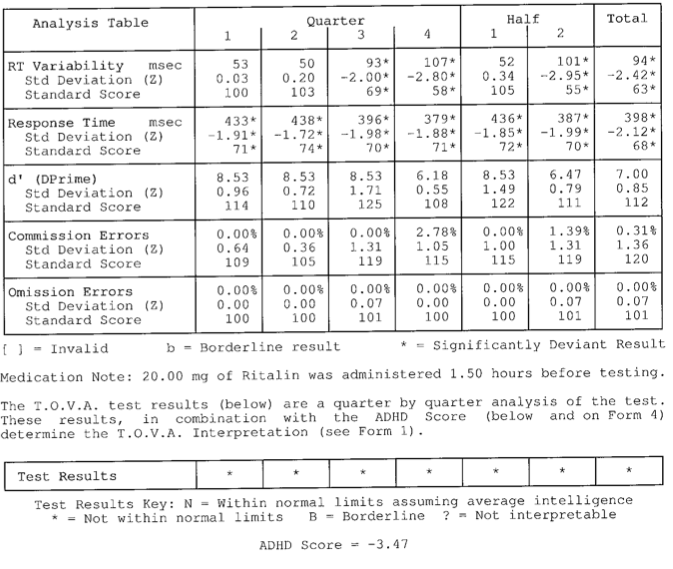 While listening to REI: -1.87. This score was significantly higher than either of the Ritalin-based performances. It was close enough to normal that if this were a prescription medication only a minor adjustment, or perhaps none at all, would be recommended. 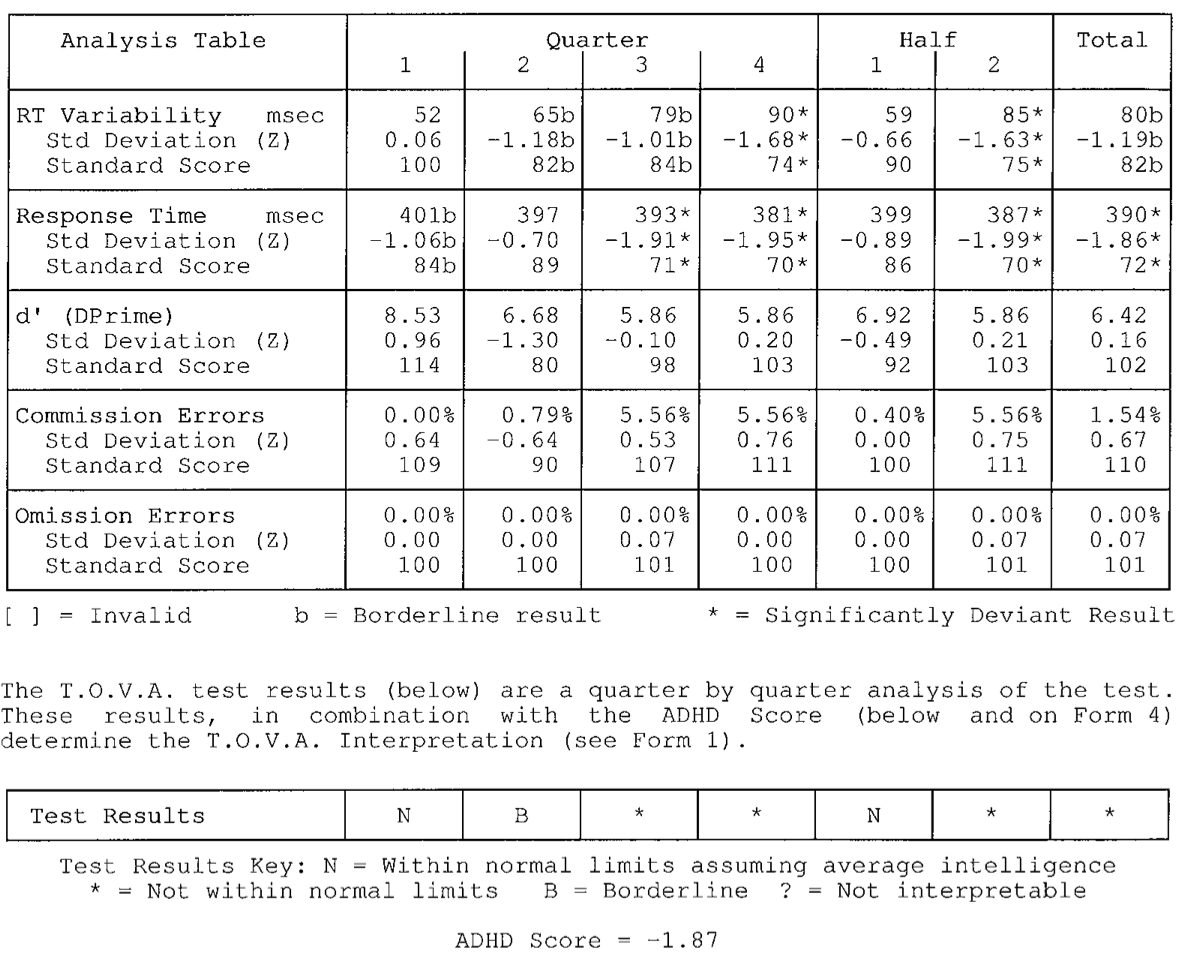 REI clearly offered the greatest benefits of the three trials. William's T.O.V.A. performance on the first half of the REI trail was within the normal range and his performance on the second half was just shy of normal. Based on past experience with adults in his age range, this suggests that William requires a higher level of stimulation on the latter portion of his REI recording. This would bring his entire performance into the normal range.

REI Stimulation levels are related to the complexity of the rhythms. It is customary to make an adjustment to a client's REI recording and introduce more complex rhythms when necessary. Based on William's performance on the T.O.V.A. using REI compared to Ritalin, it was suggested he continue listening to his REI recording and also have it adjusted to improve his later stage performance.

These results suggest that REI offers a strong alternative to Ritalin (and other stimulant medications used for ADD). The advantages of REI include an absence of side-effects, individual customization to achieve the optimal stimulation level for each person, and improved sustained attention.

Rhythmic Entrainment Intervention as it Applies to Children with Autism

Rhythmic Entrainment Intervention as it Applies to Children with Autism

A Look at Rhythmic Entrainment Intervention by Its Creator

A Look at Rhythmic Entrainment Intervention by Its Creator

Focus Your Brain with Syncopated Rhythms

Focus Your Brain with Syncopated Rhythms

Steady or Variable Tempo for Focus

Steady or Variable Tempo for Focus

Calm with an Udu drum

Calm with an Udu drum

Is 3 Beats-Per-Second the Best Tempo for Dissociative Out of Body Experiences?

Is 3 Beats-Per-Second the Best Tempo for Dissociative Out of Body Experiences?

How to Calm a Sensitive Sensory System

How to Calm a Sensitive Sensory System

Try This to Fall Asleep Fast

Try This to Fall Asleep Fast

Alpha or Theta State for Meditation: Which is better?

Alpha or Theta State for Meditation: Which is better?

Lift Your Mood With These Drumming Rhythms

Lift Your Mood With These Drumming Rhythms

Drumming to Calm for Beginners

Drumming to Calm for Beginners